skip to main | skip to sidebar

Nový most ( New Bridge , formerly Most SNP ) is a modern structure crossing Danube River (Donau, Dunaj ) in Bratislava, Slovakia. It was built in early ´70s (exact 1967-1972) and is 7th largest suspension (cable-stayed) bridge in the world. 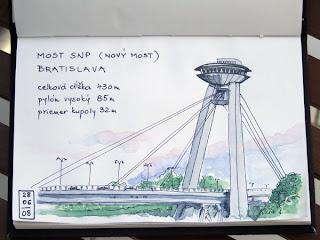 Whole bridge hangs on steel ropes (in 3 points) from a single 85m high pylon, which is in fact an A-shaped steel column on top of which is restaurant and café UFO watch.taste.groove accesible from street level by an fast elevator for 10 people in one beam of the pylon (or by an emergency stairwell of 430 stairs in the other beam ). From top of roof is amazing panoramic view over the city, the river Danube and surroundings 100 km far away. LOOK AT IT HERE ! 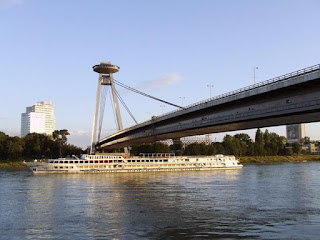 The bridge is 431,8m long, 21m wide and has two decks (upper is for car traffic, the lower 3,5m wide for pedestrian and cyclists). The entire steel structure weighs 8000 tons in total. It was done by architect J.Lacko and engineer A.Tesár and was declared the structure of the century for Slovakia. It is 27th and most lower building in World Federation of Great Towers but the only one being pylon of the bridge... 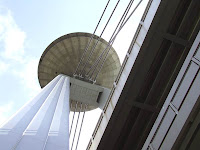 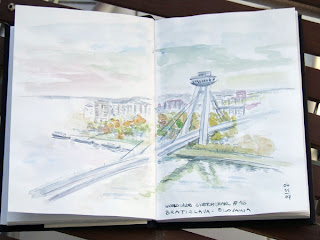 Yesterday was the 19th International Sketchcrawl . Wheather was fine, quite hot (there was 31 degrees of Celsius at 18:00 evening! ) , but perfect for all day walk around Bratislava . I start several kilometers long walk by Donau river (unfortunately the times when it was called "blue" are definitely gone ). You can see New Bridge , which steel constuction,hanging on steel cables, is 432 m long...I think it will be soon part of EDMS drawing here (174 Draw a bridge) in this blog. 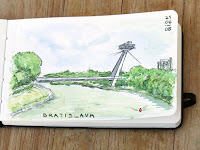 Through bank of river you come to town..to the Slovak National Museum with Memorial Of Czechoslovak Statehood with bronze lion on 14,85 m tall column. Lion holds shield with state emblem of (former) Czechoslovak state.
The next street from Slovak Muzeum you can find bronze Duck Fountain made 1914 by the sculptor Kuhmayer. It is nice fountain with interesting story...soon here in this blog :-)

Going to the Old Town is the opportunity watch ( and sketch) people resting, walking, listen to street performancers ,..

Go to the nature

Long ago
I forgot how can be pleasant
simply go to the nature
sit and look at the river
listen to song of birds.... 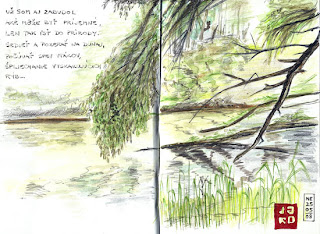 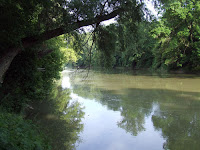 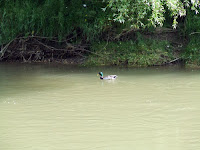 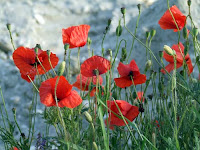 Done in plainpaper sketchbook with pen and wc pencils
Posted by JaKo at 2:13 PM 1 comment:

Labels: every day in may, Lamy pen, sketchbook, watercolor pencils

Spring is finally here ! Not by calendar, wheather is a king ! 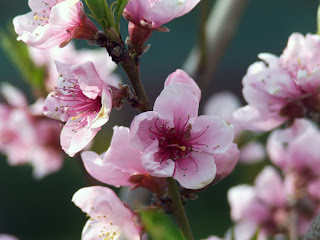 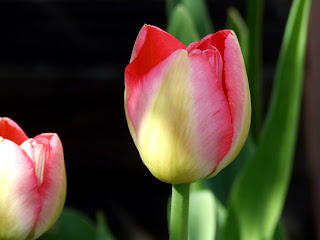 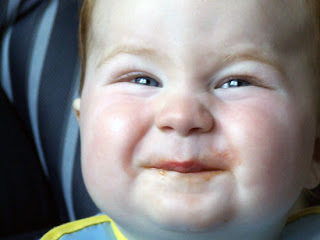 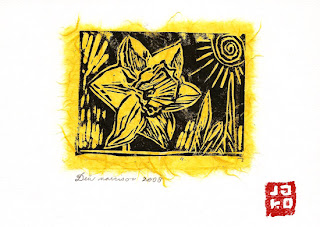 Tomorrow you can again (like each year in the beginnig of April) meet collectors from Cancer Society (Liga proti rakovine) on the streets of Slovakia towns. It will be 12th Daffodil Day here in Slovakia.Young people, students and scouts will be exchanging small yellow badge in shape of daffodil against small voluntary contribution in favour of oncologic patients.
Blogged in 2006 and 2007. 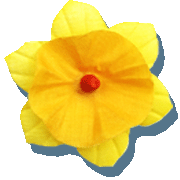 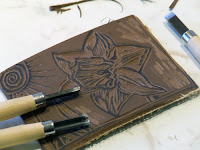 Today, on February 7th, is beginning the Year of the Earth Rat , the first in the next astrological cycle.
Chinese New Year is one of the oldest and most celebrated traditions in the world. Chinese calendar runs on a 12-month cycle, each of them has name after the animal derived from Chinese folklore as a method for naming the years. According to legend, thousands of years ago Buddha called all the animals to a meeting telling them he would make the first twelve animals arriving associated with a year, creating the signs of the Asian Zodiac. The animals follow one another in an established order and are repeated every twelve years - rat, ox, tiger, rabbit, dragon, snake, horse, sheep, monkey, rooster, dog and pig. Each animal has particular characteristics and people born in a certain year are believed to take on these characteristics. 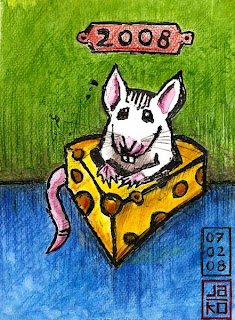 The rat is a highly respected animal in Chinese culture (unlike its western image), to rat was given first place in the zodiac and declared to represent new beginnings and keen intelligence. Those born under this sign are alert and persevering. They save and work hard for things they most desire.

*
In the Year of the Rat , we can expect 12 months of plentiful opportunities and prospects not to mention being relatively free of turbulence, (which is great to know especially if you're planning on making some long-term investments, starting new projects, or keeping the home fires burning brightly). This is a time of hard work, activity, and renewal. This is a good year to begin a new job, get married, launch a product or make a fresh start. Ventures begun now may not yield fast returns, but opportunities will come for people who are well prepared and resourceful. The best way for you to succeed is to be patient, let things develop slowly, and make the most of every opening you can find.
A good, calm year for the RABBIT, No surprises, no big problems, but not as fruitful as he wishes either. Progress will be steady as no serious opposition is foreseen in his work or home areas. A time to make plans for the future or buy property.
May you have longevity, prosperity and wealth .
*
(Linocut colored with watercolor and watercolor pencils )

On the building of Old Town Hall complex, right next to a Gothic bay window, you can see a picture of the man in black who is mentioned in one of the oldest stories - about a widow and a false oath. 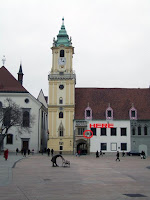 Every Wednesday , people used to come to the town hall court with their complaints to seek justice. Once a widow stated that her husband´s field had been robbed by one of the municipal lords who was sitting in the room. He replied that the woman is mad and pulled out a document with a seal which confirmed that the field was his. "The document can´t be right! " screamed the desperate widow. "Let the Municipal Lord swear that he is telling the truth ! " He did so, and added, " If it is a false oath, let me be punished justly." Then the whole house shook and became smoky, from the smoke appeared a devil, he threw the liar over his shoulder, and before he disappeared with his booty touched the Town Hall wall with his black hand, and left for ever pressed into it picture of the lying Municipal Lord. Or his own , who knows it exactly today? 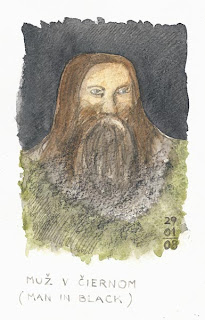 And here it is Devil/man in black , done in watercolor and Lamy ink pen on WN CotmanNOT/cold pressed 300 gsm watercolor paper
Posted by JaKo at 3:50 PM 3 comments:

There is only a few cities in the world which has so many tales and legends still living among people, like Bratislava. Many of these found their artistic realisation in fountains, pictures or statues.
*
In the niche of Neoclassical house (on Panská street 29) is a small mid-nineteenth century statue of a crouching boy laughing malevolently to which has stuck the nickname Posmievačik (Joker) 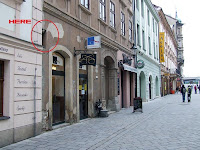 The Joker is linked with a story about a beautiful girl living in Pressburg (former name of Bratislava) who could not decide between two admirers. As a result of her quandary, she said that she would marry the suitor who could build a house more rapidly. (Clever girl , isn´t true ?) Both masters started to build houses on sites standing opposite each other. The winner got the bride. In a niche on the front of his house the Joker sat to mock his neighbour for his loss. However,some city inhabitants say that the statue is only boy who wanted to see a coronation procession, so much, that he peered over from his potty where he was sitting. Others say that the boy is looking at flood waters to see if they have started to fall. Finallu, according to some, he is showing sailors the way to the previous location of the red-light district - the Vydrica.
Who knows it today ? It´s a tales and legends all about. 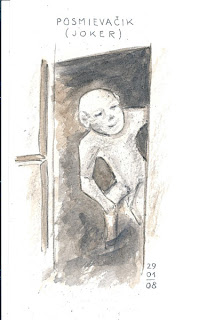 This is a Flickr badge showing public photos and videos from JaKo8. Make your own badge here.